A 39-year-old African American male with history of methamphetamine abuse and schizoaffective disorder, presented to the hospital from a homeless shelter for altered mentation. The patient had prior involuntary psychiatric facility admissions and was reportedly non-compliant with medications. From records available, he had no cardiac history. He was a current one pack per day tobacco smoker. Paliperidone was listed as a home medication, however, it was unclear if he was taking any medication. Due to his altered condition, no further history was elucidated.

On physical examination, the patient was febrile to 102 F, tachycardic at 112 beats per minute, but normotensive. He appeared disheveled and disoriented, with pinpoint pupils. No focal neurologic deficits were noted. The rest of the examination was unremarkable. Laboratory investigations showed a sodium 140 mmol/L, potassium 4.3 mmol/L and magnesium 2.1 mg/dL. Complete blood count was unremarkable. Ethanol, salicylate, acetaminophen and Lithium levels were negative. Urine drug screen(UDS)was positive for methamphetamine and opioids, negative for cocaine, marijuana and phencyclidine (PCP). Chest x-ray showed no infectious process. Computed Tomography of the head showed no acute intracranial process. The patient was admitted for toxic vs metabolic acute encephalopathy.

Electrocardiogram (ECG) showed a normal sinus rhythm with precordial ST and T wave abnormalities and a prolonged QT interval. These changes were new based on prior ECGs from seven years ago. 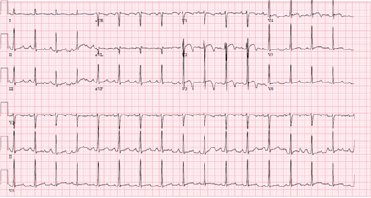 Symmetric, deeply inverted (Type A) or biphasic T waves (Type B) in precordial leads V2-V3 has become known as Wellen’s Sign, which, in the setting of angina chest pain, is a characteristic pattern for significant proximal left anterior descending artery (LAD) stenosis, termed Wellens’ Syndrome. Criteria for the diagnosis of Wellens’ syndrome include absent precordial Q waves, normal precordial R-wave progression, deeply inverted or biphasic T-waves in V2 and V3, insignificant ST-elevation (<1 mm), normal or mildly elevated cardiac troponin levels and observation of findings in a painless period [1]. Although suspicious for LAD disease, these ECG changes have specificity 89%, sensitivity 69% and positive predictive value 86% for LAD disease, suggesting they are not always diagnostic for LAD obstruction [2]. Non-cardiac factors such as cerebral ischemia, electrolyte derangements, pulmonary embolism and even illicit drugs, can present with similar ECG changes [3].

Wellen’s ECG pattern in the absence of obstructive lesions on coronary angiography has become knownas Pseudo-Wellens’ syndrome. Few cases have documented this occurrence withillicit substances inducing vasospasm, however, Pseudo-Wellens’ syndrome from vasospasm is a rare occurrence. Marijuana/cannabis along with PCP has been reported to cause Pseudo-Wellens’ syndrome through likely coronary vasoconstriction, however the absolute mechanism of cannabis induced vasospasm remains unknown [4]. Although no literature published has reported this phenomenon with methamphetamine use, the mechanism is likely similar to that of cocaine, with methamphetamine metabolites acting on alpha receptors, triggering coronary artery vasoconstriction and transient complete occlusion [5].

Interestingly, our patient had also positive opiates on the UDS. Codeine and its metabolites, hydrocodone, hydromorphone and morphine, will show up on a UDS screen as positive for opiates. There has been a report describing the possible association between MS Contin, a codeine analogue and morphine equivalent, with Pseudo-Wellens’ pattern; however the process of coronary spasm or transient obstruction has not been theorized [6]. It is possible the pinpoint pupils were from a codeine metabolite in conjunction with methamphetamine that resulted in acute ECG changes showing Pseudo-Wellen’s pattern. The tachycardia on presentation, however, argues against this etiology, as opiates typically result in cardiorespiratory depression.

Current expert recommendations say to treat Pseudo-Wellens’ syndrome as Acute Coronary Syndrome (ACS) with angiography to rule out obstructive coronary artery disease. However, no consensus guidelines exist regarding management of Pseudo-Wellens’ syndrome. In the right clinical context (no/atypical chest pain, negative troponins) that includes drug abuse, where suspicion for ACS is low, we advocate for supportive management and forgoing invasive cardiac workup. We endorse cardiac stress testing as a means to assess coronary ischemia prior to invasive angiography in this setting. Having awareness of Wellens’ ECG pattern and its non-severe cardiac causes can mitigate unnecessary concern and hasty diagnostic testing.

©2021 Anup S. This is an open-access article distributed under the terms of the Creative Commons Attribution License, which permits unrestricted use, distribution, and reproduction in any medium, provided the original author and source are credited.