Peliosis Hepatis: A Rare Cause of Hepatomegaly in a Newborn

Peliosis hepatis (PH) is a rare liver disorder which is characterized by formation of multiple blood-filled cysts within the liver parenchyma. These Blood lakes are of various sizes within the liver, and may be continuous It is a usually seen in adults following exogenous steroid intake. Very rarely, it occurs in children. Storage disorders and Congestive Heart Failure are among the common causes of heaptomegaly in a neonate.  This case report describes the presence of Peliosis Hepatis in a 16 day old neonate secondary to an adrenal nodular hyperplasia. This is a very rare case report as it describes an uncommon condition, Peliosis Hepatis, presenting as hepatomegaly secondary to endogenous steroid production.

Peliosis hepatis is a rare hepatic disorder characterized by variably sized blood-filled vascular spaces scattered throughout the liver parenchyma [1]. PH was first diagnosed, in 1861 when Wagner used the term, “pelios,” which in Greek means blackish-bluish with contusion, to describe the gross appearance of the lesions on the cut surface of the liver [2].

It is usually asymptomatic and discovered at autopsy as an incidental. The proposed etilogical factors include cytotoxic drug, gamma-ray, bacterial or viral infection, immunodeficiency, steroid intake [2, 3].

In the adults peliosis is most often associated with long term administration of androgenic anabolic steroids and oral contraceptive pills [4].

Hepatomegaly can represent intrinsic liver disease or may be the present- ing physical finding of a generalized disorder. A liver edge greater than 3.5 cm in newborns and greater than 2 cm in children below the right costal mar- gin suggests enlargement. Hepatomegaly generally occurs via five mechanisms: inflammation, excessive storage, infiltration, congestion, and obstruction [5]. We here present a case of a neonate with hepatomegaly, diagnosed as hepatic peliosis secondary to adrenal hyperplasia.

A 16 day old was sent for neonatal autopsy in the pathology department. Baby was a single live issue, 34 weeks Lower Segemnt Caesarean Section delivery, weighed 2.3 kgs with an Apgar score of 7, 9 at 1 and 5 minutes with abdominal distention. The abdominal NCCT showed a hypodense 7x8x10 cm mass arising from right lobe of liver, extending from level of T8 to S1 vertebrae (figure 1). A Contrast enhanced CT was then done which relevaed a hetrogenously enhancing mass. 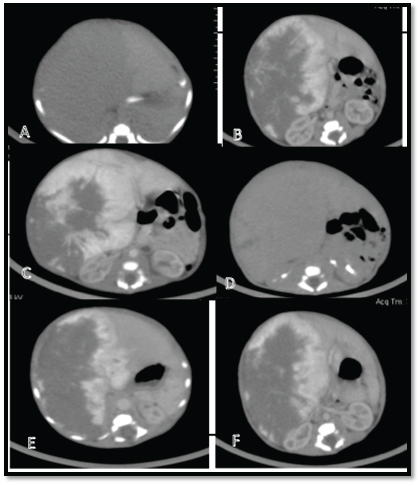 CECT axial section non contrast image [A] shows a large hypodense lesion in right lobe of liver without any calcification, arterial phase [B] shows peripheral contrast enhancement with progressive fill in of contrast in portovenous [C] and delayed phase [D] within the lesion. CECT abdomen axial sections above [E, white arrow] and below [F, Black arrow] the level of coeliac artery show gradual reduction in the aortic caliber after giving off celiac artery.

Radiologically, a possibility of infantile hepatic hemagioma was suggested. The neonate later developed respiratory distress and died 16 days post delivery and was sent for an autopsy. A Y shaped incision was given and all organs were taken out en bloc. On examination, there was hepatomegaly with liver showing dimensions15.4x10.2x9.4cm and weighed 252 grams. On cut section, the surface of the liver was solid, bile stained, grey brown with focal presence of few cystic spaces filled with blood (Figure 2) with an area of necrosis. (Figure 3). Histological sections showed variable sized blood filled spaces, lined by benign endothelial cells communicating with hepatic sinusoids (Figure 4) along with large areas of hemorrhage and necrosis. The endothelial lining was absent at few places (Figure 5). 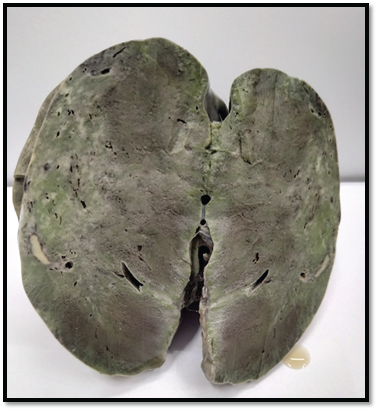 Figure 2. On Cut Section, the Surface of the Liver Was Solid and Bile Stained With Few Cystic Spaces 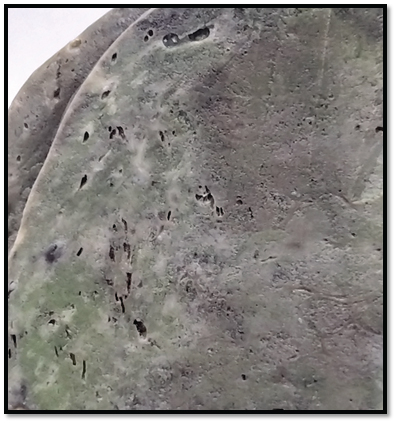 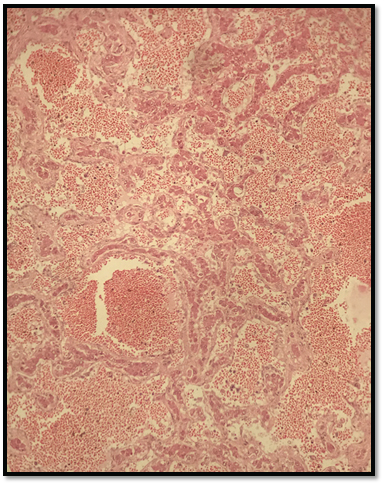 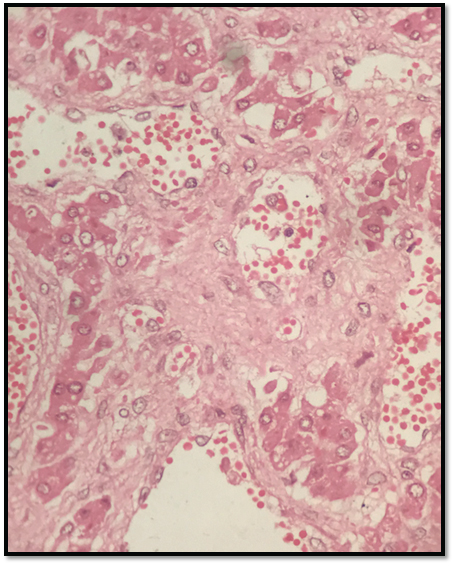 There was presence of cardiomegaly with all chambers showing dilatation. The base to apex length was 4.2 cm. Histologically it was unremarkable. Adrenals were normal in size with presence of nodule formation. Histological sections from bilateral adrenal glands demonstrated nodular hyperplasia (Figure 6). Rest of the organs were histologically unremarkable. Based on morphological and histopathological findings, a diagnosis of Peliosis hepatis, parenchymal type with bilateral adrenal nodular hyperplasia with cardiomegaly was made 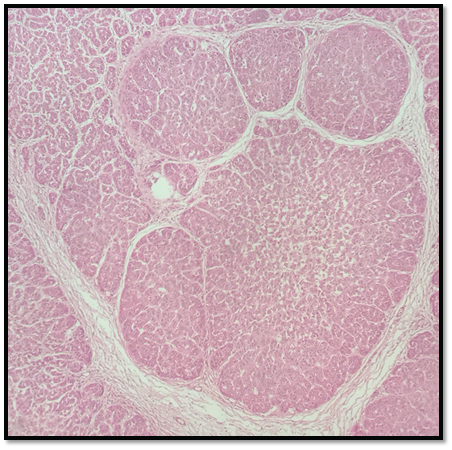 The most frequent causes of hepatomegaly in a neonate include biliary tract obstruction, congestive heart failure, drugs, maternal diabetes, malnutrition, metabolic disorders, sepsis, storage disease, viral/Torch infections. The diagnostic approach to the neonate who has hepatomegaly is designed to discriminate among the most common diagnostic possibilities [5].

PH should be kept on mind in all patients with hepatic mass, especially presented by sudden onset distention of the abdomen although other differentials like hydatid cysts should be strongly considered [6].

Schoenlank in 1916 introduced the term peliosis hepatis into the literature describing the case of a 33-year-old woman who died of miliary tuberculosis. He described the gross pathology of the liver as follows: ‘‘Underneath Glisson’s capsule, in a diffuse pattern, bluish–reddish–blackish spots that have a circular appearance and measure up to 0.15 cm are visible [7].

Concerning the underlying pathogenetic mechanisms of onset and maintenance of peliosis, the morphological data obtained by different investigators suggest that there is more than one path of formal pathogenesis (e.g., congenital malformation of vessels manifesting under altered local intravascular pressure conditions, acquired vascular disorder triggered by toxic agents, active proliferation of vessels corresponding to the benign end on the spectrum of neoplastic vascular lesions [8].

Microscopically, two different types of lesions have been described [7].

First is designated as ‘‘parenchymal peliosis’’ and consists of irregular cavities that are neither lined by sinusoidal cells nor by fibrous tissue with the adjacent hepatic tissue occasionally displaying liver cell necrosis. The second type is called ‘‘phlebectatic peliosis’’ and is characterized by reg- ular, spherical cavities lined by endothelium and/or fibrosis [9].  Most often the lesion is a mixture of the two types. Many diseases have been considered to be responsible for the development of peliosis in the liver. Initial studies mainly reported chroni- cally wasting diseases, tuberculosis and malignancy as predisposing etiological factors [7, 10, 11, 12]. Tuberculosis was replaced by the acquired immunodeficiency syndrome (AIDS) or post-trans- plant immunodeficiency later on [13, 14]. However, most frequently, peliosis has been reported to occur with the chronic intake of oral contraceptives or anabolic androgenic steroids, also known as performance-enhancing drugs15. Several theories concerning the formal pathogenesis of hepatic peliosis have been discussed [16]. Hepatocellular necrosis, eventually accompanied by an elevated intrahepatic vascular pressure, is believed to provide the space for sinusoidal dilatation in the liver.

Due to the paucity of number of cases of PH, the etiology still remains unclear. This lesion is more common in adults. The pediatric literature is limited, but the isolated cases reports demonstrate its association with cystic fibrosis, malnutrition, Fanconi anemia, Marfan syndrome, congenital cardiopathy, myotubular myopathy, and post renal transplant etc [17]. To the best of our knowledge only a single case report describes the occurance of hepatic peliosis with androgen producing adrenal tumor in a child [18].

Till recently peliosis hepatis was considered as an incidental finding at autopsy. The imaging features of PH are nonspecific and differ considerably19 leading to the difficulty in diagnosis and differential diagnosis. Liver biopsy is the most reliable method in the diagnosis of Peliosis hepatis.

To the best of our knowledge this case, presents the youngest neonate to be reported with hepatic peliosis secondary to endogenous steroid production due to nodular adrenal hyperplasia. Previously, one case ahs been reported by Wilne et al describing the occurrence of peliosis hepatis secondary to adrenal tumor in a 3 year old child [19].

Our case describes abdominal distention and hepatomegaly due to PH in a neonate. Also, it is one of the few cases describing hepatic peliosis due to endogenous steroid production due to nadrenal nodular hyperplaisa. Steroids may produce cholestasis and vascular congestion leading to the formation of vascular spaces. This theory may also explain the occurrence of peliosis in association with cardiomegaly and liver congestion in our case [19].

The establishment of correct diagnosis is essential, as it may lead to hemorrahge and devastating complications. Also removal of the inciting agent can lead to regression.

PH is a rare disease and is difficult to diagnose. It should always be kept in mind for the differential diagnosis in newly discovered and rapidly advancing liver lesions. Peliosis is far more than just a morphological peculiarity. Awareness of peliosis at autopsy as well as an appreciation for the histopathological changes in less characteristic or advanced cases may become an important issue for both the clinician and pathologist.

This case is an important contribution to the literature on a rare disorder of peliosis hepatis, as it is not often diagnosed in living patients.

Conflict of Interest: The authors declare that they have no conflict of interest.

Ethical Approval: This article does not contain any studies with human participants or animals performed by any of the authors

Informed Consent: Additional informed consent was obtained from all individual participants for whom identifying information is included in this article.

©2020 Anand A. This is an open-access article distributed under the terms of the Creative Commons Attribution License, which permits unrestricted use, distribution, and reproduction in any medium, provided the original author and source are credited.

CECT axial section non contrast image [A] shows a large hypodense lesion in right lobe of liver without any calcification, arterial phase [B] shows peripheral contrast enhancement with progressive fill in of contrast in portovenous [C] and delayed phase [D] within the lesion. CECT abdomen axial sections above [E, white arrow] and below [F, Black arrow] the level of coeliac artery show gradual reduction in the aortic caliber after giving off celiac artery.

Figure 2. On Cut Section, the Surface of the Liver Was Solid and Bile Stained With Few Cystic Spaces