The problem of the cause of weak braking of the "Pioner10" and "Pioner11" spacecraft is investigated. Contrary to the established ideas, the usual modern physical mechanism was found. The mechanism is not a deceleration, but a weakening of a very small kind of thrust due to the interaction of the solar neutrino stream with radioisotope energy sources installed on the "Pioneers". This interaction has been studied on Earth and is known as the Anomalous Neutrino Radio - Isotope (ANRI) absorption or effect.

According to many foreign scientists, deep space flights will bring riddles, the quick solution of which is problematic. However, this is not indisputable, as well as the concept of deep space, the boundaries of which should be drawn behind the Oort cloud. Probably, first it is necessary to study more deeply and in detail on Earth those physical effects and processes, the manifestation of which should be expected in space. So, let us consider the features of the flight trajectories of the spacecraft "Pioneer-10" and "Pioneer-11", which successfully passed the orbits of giant planets, but have unforeseen anomalies already at the border of the solar system (Figure. 1). Much of the Pioneer evidence comes from Naked Science (Internet). For the probes Pioneer 10 (launched in March 1972) and Pioneer 11 (April 1973), an anomaly in their flight trajectory was first discovered in the 1980s, when their main mission had already been completed. 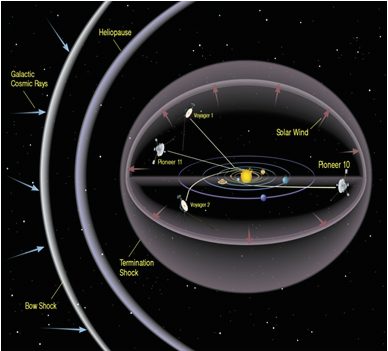 Figure 1. Scheme the Exit of "Pioneers" and "Voyagers" Outside the Solar System

The devices move in free flight in different ways: "Pioneer-10" to the edge of the Milky Way, in the direction of the constellation Taurus; Pioneer 11, on the other hand, is directed towards the center of the Galaxy, in the direction of the Shield constellation. Only the previously obtained acceleration and external forces affect the flight of spacecraft. Forces are gravitational and non-gravitational. All forces that can affect the flight of spacecraft have been identified and taken into account by a team of specialists. The problem is created by one unknown and incomprehensible force that pulls the probes back and is the mystery of the Pioneers. The power is negligible, but it is there. The latest calculations, obtained by 2002, say that the magnitude of the inexplicable negative acceleration is (8.74 ± 1.33) • 10-10 m / s2. This is negligible, but has already led to a deviation of the vehicles by about 400 thousand kilometers from the calculated trajectory. It would seem that the probes have flown billions of kilometers. At the time of the loss of communication with "Pioneer-10" (January 23, 2003), it had moved away from the Earth by more than 12 billion kilometers. These are 82 astronomical units, that is, 82 distances from the Earth to the Sun. Communication with "Pioneer-11" was lost on September 30, 1995, the device was already at a distance of 6.5 billion kilometers from the Sun, or 43 AU. e. With such a slight deviation or anomaly for Western experts, they may indicate the presence of something significant, but not yet discovered. Moreover, in astrophysics. (True, in Russia there is a well-founded effect that removes all mystery. See below). It is important that only the Pioneers, unlike other vehicles, are in flight without additional course corrections for a long time. Note that in search of the cause of the "Pioneers" anomaly, many hypotheses were considered, but after careful analysis all of them turned out to be unacceptable. As is known, radioisotope thermoelectric generators using plutonium-238 are installed on board the vehicles as energy sources (Figure. 2). 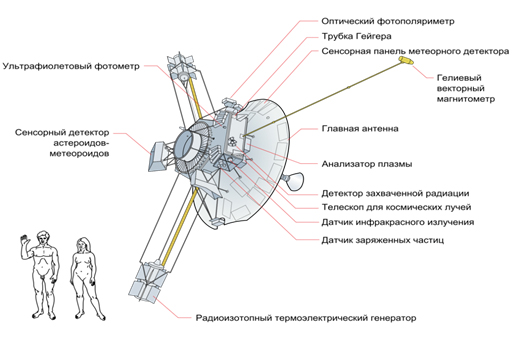 Initially, a group of researchers (NASA) managed to build a mathematical model that explains the anomalous acceleration of the "Pioneers" by at least 70%. In their opinion, the whole point is in the heat fluxes coming from the probe in different directions. And the main source of heat is radioisotope generators, which supplied energy to the onboard equipment (Fig. 2). In flight, the probes are stabilized by rotating around the longitudinal axis. The heat radiated perpendicular to the longitudinal axis is dissipated in all directions evenly due to the rotation of the apparatus around the longitudinal axis, and does not affect the movement of the probes. Calculations have shown that the heat flux emitted in the direction of movement of the vehicles gives a greater return than the one going in the opposite direction, that is, it overpowers it and causes the braking effect (~ 30%). The Portuguese group of scientists explained this value by the asymmetry of the thermal radiation of the transmitting antenna of the probes, which is unconvincing due to the high thermal conductivity and insignificant thickness of the antenna (diameter 3m). However, the missing strength can be explained by a completely different physical effect discovered in 2013. - Anomalous neutrino Radio - isotope (ANRI) effect [1-3].

Since the popularity of the ANRI effect is insignificant, let us consider the experimental results devoted to the purposeful study of the cross section for neutrino capture by an array of radioactive matter. That is, the observed essence of anomalous neutrino radioisotope (ANRI) absorption as a new effect. For the reliability of the results obtained, two types of experimental installations were used, based on various physical processes - mechanical transformation of the energy of absorbed neutrinos and thermal, and which relate to the essence of the processes generated by radioisotope generators [4-7]. Both types of measurements of the process parameters were successfully carried out; one can note the qualitative agreement of the results (capture cross section ~ 10-12). ANRI - the effect is applicable in all types of research and technology, design of modern technology. Despite the successful theoretical work on the study of neutrinos, one of the most important experiments was the determination of the neutrino capture cross section during their interaction with radioisotopes of generators, where two types of system responses were used for energy estimation - mechanical and thermal, which are determined by the capture cross section. That is the effect of the solar neutrino flux on the torsion pendulum and thermometer, which were not taken into account by the researchers when searching for the physical process responsible for the braking of the "Pioneers". Thus, the consideration and application of two completely different methods for estimating the capture cross section, taking into account the unusualness of the effect recorded by ANRI, has become extremely important. Unfortunately, for reasons from the authors of independent studies, many desirable aspects of the program of possible experiments were not touched upon: the resonant case, when the interaction of a neutrino flux from one radioisotope is compared with the same and with a set of others; with energetically different sources and receivers; in conditions of different external physical fields. It is also necessary to support new emerging works [8-10]. Consider a study with a Cavendish torsion balance, (CTB) - with a surprisingly unique device (Figure. 3) [10-13]. 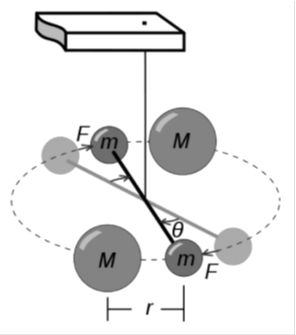 Figure 3. Schematic Diagram of the Cavendish Torsion Balance (There are no M Masses): M - Small Masses of The Dumbbell, F - External Forces Acting on M, Ѳ - Angle of Rotation of the Dumbbell under the Action of an External Force

The simplest scheme was used without masses M, and one of the masses was supplemented with a radioactive source (Figure. 3). In principle, for the Pioneers, the generators also form dumbbells, which are acted upon by the flux of solar neutrinos; therefore, the estimates of the forces of influence methodically coincide. The difference is only in the activity of masses and generators, their masses, but this is only for the Earth's zone. As the Pioneers move away from the Earth (Sun), the solar neutrino flux falls in proportion to the square of the distance between the spacecraft and the Sun. Accordingly, the heat flux from the generators and the mechanical pressure (thrust) from the Sun decrease, which, in the absence of understanding the essence of the ANRI effect, is interpreted as a manifestation of the action of an unknown braking force. Therefore, let us consider in detail the interaction of the radioactive mass and the solar neutrino flux. For the first time, the experiment on the influence of the solar neutrino flux on the CTB according to this scheme was carried out from September 7 to October 7, 2015. The number of neutrinos Nv emitted during T = 1 s is completely determined by the solar luminosity erg / s: neutrino / s. Calculations of the neutrino flux for the standard model of the Sun, performed by J. Bakal (USA), give a value of 7.6 ... 3.3 SNU, while the neutrino flux measured at the Davis installation (USA, 1981) with energies above 0.814 MeV is 1, 8 ... 0.3 SNU (see Neutrino Astronomy). The discrepancy between the predicted and measured values ​​can be explained by two general reasons: A) more complex internal processes on the Sun not reflected in the accepted models. These processes can reduce the neutrino flux in the high-energy part of the spectrum. An extreme possibility of this kind is the presence of another source of energy in the sun is not currently recognized. B) the properties of neutrinos. For example, neutrino oscillations, the concept of which was first introduced by B.M. Pontecorvo in 1957, or the decay of ve on the way from the Sun to the Earth. The total number of emitted neutrinos Фγ can be estimated based on the luminosity of the Sun. The number of neutrinos emitted by the Sun is obtained by multiplying the total number of reactions N≈1038 s-1 by two, and their flux to the Earth by dividing it by 4πR2 (where R is the distance of the Earth from the Sun): 6 × 1010 neutrinos / (cm2 × s). 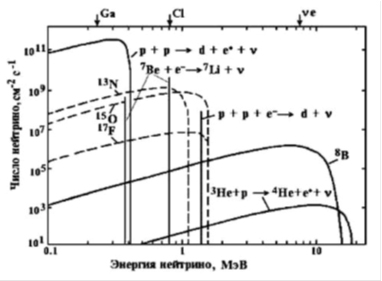 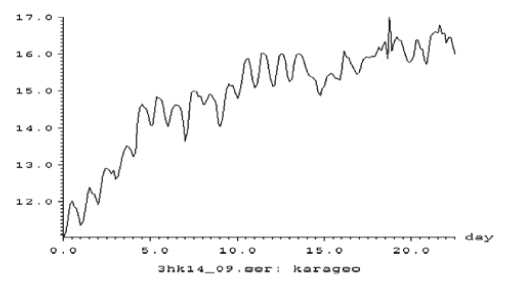 The data obtained on the variations in Kp indices and dumbbells were analyzed (Figure. 6). As follows from Figure. 6, in full agreement with the data of R. Davis (Figure. 4), there is a significant anti - correlation (P> 0.999), which is also confirmed by spectral analysis (Figure. 7).

Figure 6. Cross-Correlation Function between Variations of the Kp Indices and Perturbations of the Dumbbell Torsion Balance

To compare the digital thermal thermometers, we used the temperature records of the Baikal uranium ore irradiated it with the Cs137 neutrino flux (Figure. 8).

©2020 Khavroshkin OB. This is an open-access article distributed under the terms of the Creative Commons Attribution License, which permits unrestricted use, distribution, and reproduction in any medium, provided the original author and source are credited.

Figure 1. Scheme the Exit of "Pioneers" and "Voyagers" Outside the Solar System

Figure 3. Schematic Diagram of the Cavendish Torsion Balance (There are no M Masses): M - Small Masses of The Dumbbell, F - External Forces Acting on M, Ѳ - Angle of Rotation of the Dumbbell under the Action of an External Force

Figure 6. Cross-Correlation Function between Variations of the Kp Indices and Perturbations of the Dumbbell Torsion Balance