Background: Preterm birth is defined as a delivery which occurs at less than 37 weeks completed of gestation. The majority of preterm birth remains vulnerable to long term complications that may persist all over their lives. Globally, about 12.9 million births (9.6%) of all births worldwide were preterm and of these more than 60% of preterm births occur in Africa and South Asia while about 0.5 million were in each of Europe and North America. There is limited evidence on magnitude of preterm birth and associated factors, among women attending delivery service at public hospitals of low income countries like Ethiopia including the study setting, Harar town.

Methods and Material: Institutional based cross-sectional study was conducted on 325 women attending delivery service in Harar public hospitals. Structured questionnaires were used to collect data; systematic sampling technique also used to select participants. A total of three data collectors and one supervisor were participated on the study. The data was entered to SPSS version 22.0 for analysis. Pretest, double data entry and local language translation are used to assure data quality .The descriptive and logistic analysis was employed. To measure the strength of association between dependent and independent variables, Crude and Adjusted Odd Ratios with 95% Confidence interval was calculated. Finally, the variable which shows p-value < 0.05 considered as statistically significance.

Conclusion and Recommendation: The prevalence of preterm birth in Harar town public health hospitals is slightly higher than studies done in different parts of Ethiopia. Not attending ANC, short inter pregnancy interval (<24 months), previous history of APH, Presence of chronic medical illness and low hemoglobin level (<11g/dl) were found to be statistically significant with the occurrence of preterm birth in current pregnancy therefore effort need to improve on it

Preterm birth is defined by WHO as all viable births before 37 completed weeks of gestation or fewer than 259 days since the first day of woman’s last menstrual period [1]. It is classified as extremely preterm < 28 weeks, very preterm 28 to <32 weeks, and moderate preterm 32 to < 37 weeks can also be spontaneous or provider initiated (induced) [2].

Globally, about 12.9 million births (9.6%) of all births worldwide were preterm and of these more than 60% of preterm births occur in Africa and South Asia while about 0.5 million were in each of Europe and North America and 0.9 million in Latin America and the Caribbean [3].

The rate of preterm birth is escalating globally and ranges from 5 to 7% in developed countries and significantly higher in least developed countries [4]. Prematurity is one of the leading causes of neonatal deaths in Africa (11.9%) and is a major public health problem and it is responsible for 27% of all early neonatal admission [5]. According to the report from “white paper on preterm birth” in 2011, of all 4 million annual early neonatal deaths 28% are due to preterm birth [6]. Preterm birth has many long and short term consequences like cerebral palsy, mental retardation, visual and hearing impairments, behavior and social-emotional concerns, learning difficulties, and poor health and growth, neurosensory deficits (blindness, deafness), intra ventricular hemorrhage, necrotizing enter colitis, and delay in physical and mental development [8, 9]. The major risk factor of preterm delivery was absence or inadequate prenatal care, low monthly income, no contraceptive use, cesarean delivery, and clinical complications during pregnancy [7]. There is limited information on magnitude of preterm birth and associated factor among women attending delivery service at public hospitals of Harar Town therefore this study aimed to contribute in identifying magnitude and factors associated with preterm birth

Significance of the Study

The result of this study provides valuable information on magnitude of preterm birth and associated factors. Determining factors has a great role in guiding health professionals and health policy makers to design the intervention strategy and applying necessary preventive and appropriate measures to decrease preterm birth and new born mortality and morbidity. In addition, it will help to fill the research gaps in the study area and serve as base line information for other researcher.

Institutional based cross sectional study was conducted among mother who gave birth in Harar Town public health institution. Harar is located in the eastern part of Ethiopia 525 Km away from Addis Ababa, the capital city of Ethiopia. In the region, 27 health posts, 8 health centers and 2 Public, 2 Private, 1 Federal Police, 1 Fistula Hospitals, 18 Private for profit clinics, 25 pharmaceutical retails out let, 3 pharmaceutical whole sellers and 2 modern laboratories are available. The study was conducted in 2 public hospital namely Jugel and Hiwot Fan Specialized university hospital from April 11 to May 17, 2019

Women who gave births during the study period with known LNMP or had ultrasound check up result during pregnancy were include on this study while. A woman who doesn’t have consent, Women who are unable to communicate was excluded.

Two governmental public hospital were include sample was proportionally allocated based on their patient flow. Average monthly patient flows in two hospitals were 402 and 180 at HFSUH and Jegula Hospital. Sampling frame was developed from delivery registration book and subjects were selected by using systematic random sampling method. Finally a total of 325 participants were selected based on their allocation until desired sample size was meeting. 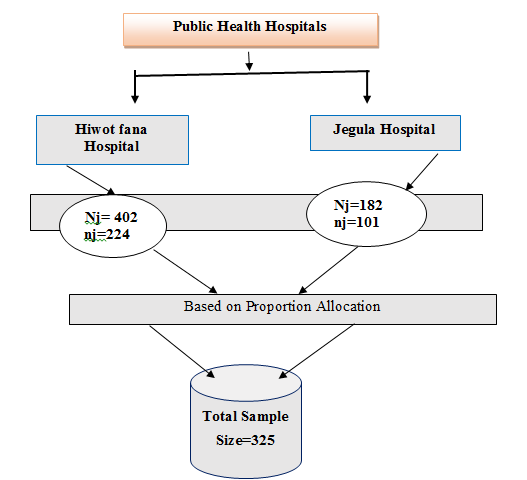 Variables of the Study

The interviewer administered questionnaire was adopted after reviewing relevant scientific literatures. The tool were translated into local language Afan Oromo and translated back to English language to check its consistency, questionnaire contains socio demographic, obstetrics, health care service utilization and medical related factors. Data were collected by three diplomas and one BSc Midwives.

To assure the quality of the data, properly design data collection instrument was developed and pretest was conducted. Training was given for data collectors and supervisors for three days on the instruments, method of data collection, ethical issues and purpose of the study. Completeness and correctness of data was checked on daily based.

Ethical clearance letter was obtained from Harar health Science College Ethical Review Committee. Permission was obtained from study institution. All the participants were informed the purpose, advantages and disadvantages, there have the right to be involved or not. Consent was obtained from each respondent prior to data collection; Confidentiality was maintained by avoiding names and other personal identification.

Preterm Birth: Refers to the birth of baby that occurs before 37 completed weeks of gestation [2].

Term Birth: Refers to the birth of baby that occurs after 37 completed weeks of gestation [2].

Last Menstrual Period: The date of the starting of last menstruation the women had to the index pregnancy [12]. 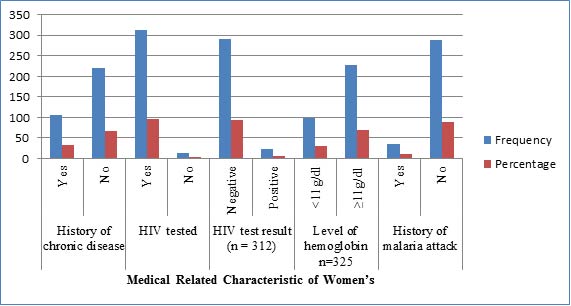 Figure 2: Medical Related Characteristics of Women Who Give Birth in Public Hospitals in Harar Town, Eastern Ethiopia, April 11 To May 17

P-value ≤0.05 is said to be statistically significant

Mothers who had history of Ante partum during current pregnancy were 1.3 times more likely to have preterm birth compared to counterpart. These are consistent with study conducted in Tehran [20], Kenya [16] and Debremarkos [11]. These might be due consequence of anemia following bleeding predispose to hypoxia and preterm to the new womb.

In these study mothers who had no ANC follow up were 1.5 times more likely to deliver preterm birth than counterpart .These in lined with study conducted in Cameroon [21] and Debremarkos [22]. The association might be due to Antenatal visits of the pregnant mothers are very important as they provide chances for monitoring the fetal wellbeing and allow timely intervention for feto-maternal protection. This may be described to the routine provisions of nutritional and medical advice or care and supplementations offered during ANC visits.

Mothers who had inter birth interval at less than 24 months were 1.3 times more likely to have preterm births compared to mothers who had inter pregnancy interval greater than or equals to 24 months. These are similar with study done in Kenya [16] and Debre markos [11]. These might be due to existence of unidentified risk factors which precipitating preterm births in mothers with short inter pregnancy interval as well as it may be maternal related problems such as in ability to take care for close birth interval which might be due to socio economic status.

Women who had history of chronic disease were 1.3 times more likely to deliver preterm birth than counterparts. These in lined with study conducted in Malawi [23] and Debremarkos [11]. These might be due to maternal chronic illnesses may alter or limit the placental delivery of oxygen and nutrients to the developing fetus, possibly resulting in fetal growth restriction. In addition, they can increase the risk of preeclampsia and, thus, increases the risk preterm birth. Therefore, acute maternal medical conditions might lead to preterm birth.

Finally women whose hemoglobin level is less than 11g/dl were 1.4 times more likely to deliver preterm birth than counter parts. These in lined with study conducted in Malawi [23] and Debremarkos [11]. These might be due to fact effect of anemia on the oxygen bearing capacity and its transportation tendency to the placental site for the fetus.

The prevalence of preterm birth in Harar town public health hospitals is slightly higher than studies done in different parts of Ethiopia and still a major public health problem in the area. Not attending ANC, short inter pregnancy interval (<24 months), previous history of APH, Presence of chronic medical illness and low hemoglobin level (<11g/dl) were found to be statistically significant with the occurrence of preterm birth in current pregnancy.

Strength and Limitations of the Study

©2020 Zewde GT. This is an open-access article distributed under the terms of the Creative Commons Attribution License, which permits unrestricted use, distribution, and reproduction in any medium, provided the original author and source are credited.

Figure 2: Medical Related Characteristics of Women Who Give Birth in Public Hospitals in Harar Town, Eastern Ethiopia, April 11 To May 17

P-value ≤0.05 is said to be statistically significant