Sparganosis Presenting with Pruritus and Myoclonus

Sparganosis is a rare parasitic infection caused by plerocercoid larvae tapeworms of the genus Spirometra sparganum (Spirometra sp.), known to be transmitted through ingesting freshwater or an infected host organism, or via direct contact through an open wound. While sparganosis features a wide variety of clinical presentations including dermatological, muscular, ocular and neurological abnormalities, this is the first documented instance in which sparganosis presented with myoclonus. This case report highlights the possible diagnosis of sparganosis in patients presenting with myoclonus and pruritus, as well as the importance of gathering past medical history involving past ingestions.

Sparganosis is a rare systemic infection caused by parasitic tapeworms of the genus Spirometra sparganum (Spirometra sp.), such as S. mansoni, S. ranarum, and S. proliferum [11]. Although cases have been reported in Africa, Europe and South America, this infection is endemic in East and Southeast Asia, including China, Korea, Taiwan, Japan, and Thailand [7]. This phenomenon is hypothesized to be due to cultural practices involving eating raw reptiles and amphibians, as well as the application of Chinese medicine using frog or snake flesh on an open wound; previous case studies have supported this hypothesis [3].

Patients with sparganosis may present with skin abnormalities such as urticaria, painful edema, as well as subcutaneous irregular and migrating nodules containing larvae [4, 16, 12]. However, the patient may be asymptomatic, and the parasite can remain unnoticed until it is discovered incidentally during surgery or other investigations [1]. Sparganum also may cause severe inflammation and fibrosis as the larvae migrate throughout the connective tissues throughout the body, such as abdominal and lower extremity muscles [10]. In addition, sparganosis may affect the eye, resulting in exophthalmos, swollen eyelids, lagophthalmos and corneal ulcers [16]. Furthermore, sparganosis may also affect the brain and spinal cord, leading to paralysis or death [6, 5].

Spirometra sp. can infect the host through several modes of transmission. One mechanism is through drinking from stagnant freshwater [14]. Freshwater may contain copepods such as Cyclops which are infected with Spirometra sp. [11]. Another method is via ingesting raw or undercooked reptiles or amphibians containing spargana, which are Spirometra sp. in the second larval stage (plerocercoid) [8]. An additional common mode of entry is direct contact between an open wound and the body of an infected host, which may occur through the application of a poultice in alternative medicine treatments [8].

The definitive diagnosis of sparganosis is made by identifying parasite in a specimen of the affected tissue [15]. The biopsy results may also reveal peripheral eosinophilia [15]. The most effective method of treating sparganosis is surgical removal of the intact worm and the surrounding granuloma, and this is true even for cerebral infections which may be more challenging to access [8]. However, if direct removal is not possible or there are multiple worms proliferated throughout the patient’s body, treatment with praziquantel and dexamethasone with repeated courses of therapy may be effective [8].

A 65-year-old Korean male plumber presented to the emergency room with pruritus on his right leg which started 4 to 5 years ago. This was accompanied with involuntary movement in his right leg, which disturbed his gait. He was previously healthy. His medications at the time of visit included clonazepam 0.25mg twice per day for myoclonus.

Upon physical examination, there was a well-circumscribed, oval-shaped erythematous papule on the right leg, approximately 7.5 cm inferior to the right patella. Size was approximately 3mm in diameter. There was a rubbery consistency and absence of tenderness upon palpation. There were no other lesions on the body with a similar appearance, and there were involuntary movements of his right leg, which were consistent with myoclonic jerks. He denied decreased or loss of consciousness during these attacks, but reported a stiff sensation throughout his entire body. Furthermore, he reported facial tremors, but abnormal facial movements were not detected on exam. The rest of the physical examination was normal. There was no excessive rigidity in all four limbs, and deep tendon reflexes were normal. The plantar reflex was down going bilaterally. Fundoscopic examination was unremarkable.

The patient’s routine laboratory testing results were unremarkable aside from eosinophilia (> 0.5 × 109/L). Since his symptoms were suspected to have neurological etiology, investigations for peripheral neuropathy or brain lesions were pursued. However, there were no findings that could account for the patient’s symptoms. X-rays of the lower legs were unremarkable and CT Brain showed presence of right maxillary sinusitis (Fig. 1).

3T head MRI revealed minimal small vessel ischemic lesions in the white matter of both hemispheres, and ruled out an aneurysm (3mm) in the region surrounding the left posterior communicating artery (Fig. 2). There was sinusitis on both ethmoid sinuses and the right maxillary sinus (Fig. 2). Electroencephalogram (EEG) showed repetitive 5Hz sharp waves (Fig. 3). There were no pathological rhythms or epileptic discharges (Fig. 4). Nerve conduction study was normal. Motor evoked potential (MEP) and somatosensory evoked potential (SEP) of both legs were unremarkable (Fig. 3). In order to manage the patient’s myoclonus, a low dose of the anticonvulsive medication clonazepam (Rivotril 0.5mg 0.5T BID) was prescribed. 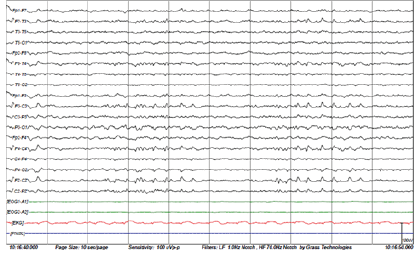 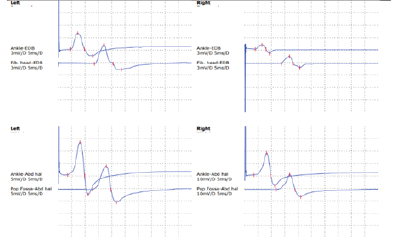 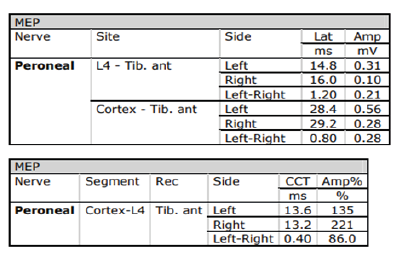 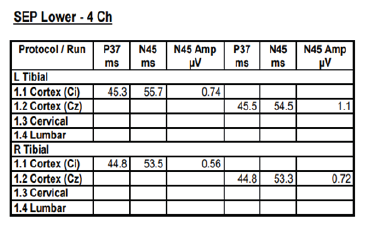 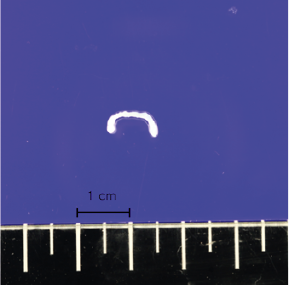 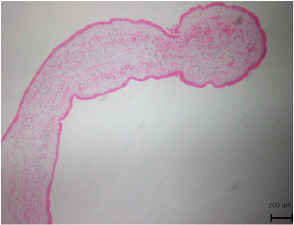 Figures 4-1 to 4-2: Pathology results: A sparganum was discovered which was 12mm length and 3mm in width. The biopsy also revealed abnormally high levels of lymphocytes and eosinophils in subcutaneous fat, which is consistent with septal and lobular panniculitis caused by sparganum (H&E stain).

Throughout the neurological investigations, the patient continuously expressed concern regarding his pruritus. As a result, he was referred to dermatology where he was suspected to have a lymphoma, while also considering lipoma or epidermoid cyst as possibilities. Consequently, the lesion was removed via punch biopsy and sent to pathology, where it was fixated in 10% formalin, mounted on a glass slide and examined using elastic light-scattering spectroscopy (Fig. 4). The pathology report revealed abnormally high levels of lymphocytes and eosinophils in subcutaneous fat, which is consistent with septal and lobular panniculitis, and made the diagnosis of subcutaneous T-cell lymphoma. However, a confirmatory pathology referral revealed a head-like structure which prompted further examination of the tissue specimen. Ultimately, a sparganum was discovered which had a length of 5 mm and a width of 2 mm and the diagnosis was revised to sparganosis (Fig. 4).

Further discussion with the patient about his past medical history increased the likelihood of sparganosis. He served in the Korean military approximately 40 years ago and recalled an episode of eating a snake that was caught at the training grounds. Additional laboratory findings also confirmed this diagnosis: Serology showed positive results for the antibodies of Sparganum Ab, Clonorchis Ab, and Toxocara Canis IgG, and negative results for Cysticercus Ab and Paragonimus Ab. Levels of the tumor markers PSA (prostate specific antigen), AFP (Alpha-fetoprotein), CA19-9 (carbohydrate antigen 19-9) were unremarkable. CEA (carcinoembryonic antigen) level was slightly elevated.

Since the removal of sparganum through biopsy, the patient’s erythematous papule, pruritus and myoclonus resolved. The patient denied further investigations, and the patient was discharged from the hospital. A series of follow-up outpatient visits up to 8 months post-discharge showed no remission of symptoms, and he was eventually taken off of clonazepam.

This was the case of a 65-year-old Korean male who presented to the ER with pruritus and involuntary movement in his right leg. Physical examination revealed a well-circumscribed red papule on his right leg with a diameter of approximately 3mm and rubbery consistency. The lesion was initially suspected to be a lymphoma, lipoma or cyst but a sparganum was detected in his punch biopsy specimen, and the patient was ultimately diagnosed with Sparganosis. As seen in this case, the definitive diagnosis is made through identification of the parasite in a tissue specimen and surgical removal is the recommended treatment when the parasite is directly accessible [13]. Consistent with this diagnosis, the patient ultimately recalled consuming a raw snake approximately 40 years ago. Thus, it is hypothesized that the mode of transmission in this case was the ingestion of raw or undercooked snake flesh that was infected with the Spirometra sp.. However, it is possible that the patient previously drank water infected with Spirometra sp., and the parasite moved down to the right leg; previous research has supported the ability of spargana to migrate internally from the stomach into the peritoneum, muscles and subcutis [13]. Furthermore, there is also the possibility that while the patient’s legs were immersed in water during fishing, Spirometra sp. entered small open wounds in his skin after being released from a nearby host organism [12].

While various neurological symptoms of sparganosis including have been reported, this is the first documented instance in which sparganosis presented with myoclonus. This can inform clinicians to consider the possibility of sparganosis when there is a simultaneous presentation of myoclonus and pruritus. It is important to note that a patient may be asymptomatic for a prolonged duration after the parasite enters their body, as documented by numerous case reports of patients who deny consumption or contact with potentially infectious vectors for more than 20 years before symptoms arose, and this is possible since even the mature Spirometra sp. can survive for decades [2, 9]. As a result, the patient may not disclose such events, especially if they occurred long ago, deeming it to be irrelevant to their current symptoms. Therefore, a specific inquiry of the patient’s lifetime history of the past ingestion of freshwater, raw or undercooked meat as well as experiences with poultice will be helpful when suspecting sparganosis.

The authors received no funding for this work.

The study was conducted according to the guidelines of the Declaration of Helsinki. Ethics board review and approval were obtained.

Written informed consent has been obtained from the patient to publish this paper.

The authors would like to express appreciation to the patient for their willingness to contribute to scientific literature.

The authors declare no conﬂict of interest.

©2022 Lee DG. This is an open-access article distributed under the terms of the Creative Commons Attribution License, which permits unrestricted use, distribution, and reproduction in any medium, provided the original author and source are credited.

Figures 4-1 to 4-2: Pathology results: A sparganum was discovered which was 12mm length and 3mm in width. The biopsy also revealed abnormally high levels of lymphocytes and eosinophils in subcutaneous fat, which is consistent with septal and lobular panniculitis caused by sparganum (H&E stain).