The Ischial Pressure Sore: About a Case Treated By the Inferior Gluteus Maximus Muscle Flap and Literature Review

Ischial pressure sore is a common trophic complication of the re-educated paraplegic patient. The treatment is usually surgical and involves the use of reconstruction flaps. The aim of this work was to report the case of a patient with a bilateral ischiatic pressure sore treated with the inferior gluteus maximus muscle flap. The patient was a 45-year-old paraplegic with bilateral ischial pressure ulcers who had been developing bilateral ischial pressure ulcers for 10 years. At the time of the examination, he had a type IV (NPUAP) pressure sore with bone exposure associated with urinary and rectal incontinence. We decided on a reconstruction using the inferior gluteus maximus muscle flap with an inferior gluteal rotational skin flap. A small wound disunion occurred and complete healing was achieved within 23 days.

After two years follow up, no recurrence has been noted.

The inferior gluteus maximus muscle flap is easy to perform, reliable, does not cause functional problems and can be mobilized again in case of recurrence.

Pressure ulcer is a sore of the skin and subcutaneous tissues by their compression between a bony structure and a spine board. It is a complication of prolonged decubitus, favoured by a particular situation of total or subtotal loss of mobility (paraplegia, hemiplegia), skin unconsciousness due to major sensitivity disorders and disturbances of consciousness, particularly comas. The ischial pressure sore is the ultimate sitting pressure sore and typically affects the re-educated paraplegic patient [1]. It usually leads to a very moderate loss of skin substance in the gluteal fold or slightly higher [2]. Directed healing is rarely sufficient and reconstruction is often necessary. It involves muscle and fascio-cutaneous flaps from the buttock, thigh and sometimes the scrotum. Surgery must however be accompanied by a good improvement in the perioperative conditions, particularly maximizing nutrition, adapted bedsore mattress and minimizing infectious. Neglect or lack of knowledge explains the failures of surgery. We report through this observation the case of a patient with a bilateral ischial pressure ulcer treated with the inferior gluteus maximus muscle flap.

A 45-year-old male patient was admitted to the Department of Plastic Surgery at the Aristide Le Dantec Hospital for a bilateral ischiatic pressure ulcer type IV of the NPUAP classification that has been evolving for 10 years. The patient had a flaccid paraplegia following a traffic accident, associated with urinary and rectal incontinence. He had been hospitalized several times for local care, rehabilitation and treatment of complications, but these had so far failed to heal the sores. The entrance examination showed a patient in fairly good general condition. There were bilateral stage IV ischial pressure sores about 10 cm left and 6 cm right of the major axis. The edges were sclerotic, with the clean bottom in the budding phase with exposure of the ischiatic bone. Infectious and nutritional status was normal.

We decided on a flap reconstruction of the inferior gluteus maximus muscle. The operation was performed in the prone position under general anaesthesia. It began with wide debridement of the ulcer with partial bone resection. The incision is then extended laterally to the trochanter for harvesting the inferior gluteus maximus muscle, which is translated to cushion the loss of ischial substance. An inferior gluteal rotational skin flap ensured skin coverage. A suction drainage was left in place at the end of the procedure. Patient was then in prone position to discharge the gluteal region until complete wound healing was achieved. Sitting and supine position were allowed on an anti-bedsore mattress 3 weeks after healing. Operating suites were marked by discrete skin suffering at the union of the vertical and horizontal incisions on the right. Hospitalisation lasted 12 days and complete healing was obtained after 23 days. No recurrence occurred after two years follow-up. (Figure1) 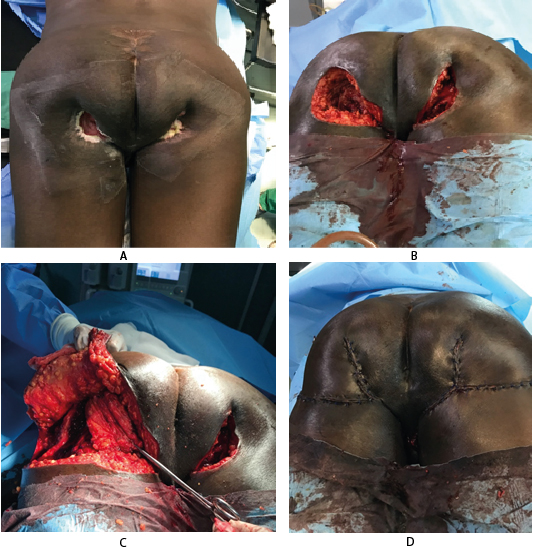 1B. Wide Debridement of the Sores 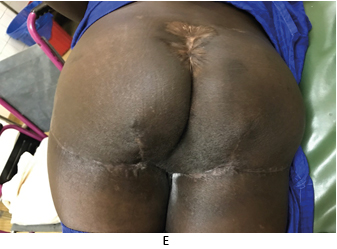 Pressure ulcers are common decubitus complications due to the lack of effective prevention protocols in patients who are paralysed or in a coma. Spinal trauma victims are the most frequently affected. It is a complication for which the most effective treatment is prevention. Once installed, multidisciplinary care is necessary to avoid a progression to chronicity. Of all the possible locations, those at the sacral, trochanteric and ischial level are by far the most frequent [3]. Ischial pressure sore is that of the re-educated paraplegic and wheelchair-bound patients are therefore most often affected [1].

Initial local management consists of discharge and directed healing. However, this treatment is rarely sufficient when the bone is exposed, so surgical treatment is frequently used [2]. Surgical treatment of ischial pressure ulcers is typically based on fascio-cutaneous or musculocutaneous flaps of the gluteus maximus type or hamstrings. The lower gluteus maximus muscle flap, which is simple to perform, allows ischiatic pressure ulcers to be covered while sparing the muscle flaps usually used for this indication. The recurrence rate associated with the inferior flap of gluteus maximus muscle is comparable to that of the muscle flaps of biceps femoris and gluteus maximus (harvested as a whole) [4]. This flap retains the upper bundle, which can be mobilized in the event of a sacral ulcer. It does not sacrifice the function of the gluteus maximus muscle and can therefore be performed in the valid patient. The inferior gluteus maximus muscle flap is the first line cover flap for ischial pressure ulcers with a diameter of less than 8 cm [4]. These muscle flaps are voluminous and are well suited for large losses of substance and allow cushioning of the ischium, thus limiting the rate of recurrence. In the literature, this rate varies from 8 to 64.8% [5, 6, 7] and it is therefore important to anticipate potential recurrences by sparing as much as possible the possibilities of subsequent flaps [2]. There are, however, alternatives to muscle flaps, such as scrotal flap [2] and fasciocutaneous flap under the buttocks, which can be made reliable by perforating the deep femoral artery [8]. The advent of perforating flaps with no muscle sampling increases the range of choice of flaps with less morbidity [9].

The ischial pressure sore is a frequent complication of the paraplegic patient who is re-educated from prolonged sitting. Surgical treatment is usually the only option. The inferior gluteus maximus flap is a good alternative because it provides volume, does not cause functional problems in the able-bodied subject and can be remobilized in case of recurrence.

©2020 Ndiaye L. This is an open-access article distributed under the terms of the Creative Commons Attribution License, which permits unrestricted use, distribution, and reproduction in any medium, provided the original author and source are credited.

1B. Wide Debridement of the Sores