Birds are considered a good model for studying the phonation process, the syrinx is a vocal organ in birds. The purpose of this study is to investigate the topographical and morphological characteristics of syrinx of male domestic fowl. In the current study we use the syrinxes of seven adult males. The study shows that the syrinx of investigated birds is tracheobronchial in type. It consists of; tympanum, tracheosyringeal and bronchosyringeal groups. In addition, there are interbronchial ligament (brachidesm), lateral and medial vibrating membranes as well as the pessulus at the tracheal bifurcation. Tympanum part forms the first part of the syrinx; it is formed of four tracheal rings. The tracheosyringeal part is located at the point of tracheal bifurcation just below the tympanum. It is formed of four highly modified incomplete tracheal rings. The bronchosyringeal part is formed of first three pairs of bronchial half-rings. The current study was presented the detailed morphological characteristics of syrinx in male domestic fowl.

The syrinx is the organ of voice in birds and is probably present in all avian species. Some birds vocalize all year long while others call only during the mating season or during migration [1]. According to Baumel et al. [2], there are three types of syrinx; tracheal, tracheobronchial and bronchial, depending on the deviation of the cartilages of the syrinx from either the trachea or the bronchi. The tracheal elements laid cranial to the bifurcation of the airway, while the bronchial elements laid at the most cranial part of the right and left primary bronchi. The great majority of birds are described as having a tracheobronchial syrinx which is located at the bifurcation of the trachea as stated by Nickel et al. [3], the tracheobronchial syrinx has both tracheal and bronchial elements. The classification of birds depended on presence or absence of the basic structure of syrinx or their musculature [4]. The regulation of airflow and action influences acoustic parameters of syrinx is controlled by muscles during closing and opening of the passage airways [5-7].

Seven males of domestic fowl collected from Assiut governorate (weighted about 1450 to 1500 gm) were used in this study. All of the birds were slaughtered. After thoracic incision, the topographical position of syrinx was observed, and the anatomical examination was done. Different measurements were taken using Precision Digital Vernier Caliper (the length of tracheolateralis and sternotrachealis muscles). The syringes of cocks were left in 1% methylene blue solution for 15 min then passed through 70% alcohol for two hours for the cartilages to become more evident and then photographed. The syringes were observed, described and photographed using a stereomicroscope (LEICA S6D) fitted with a digital camera (DFC-290).

The syrinx of examined cocks is observed within the body cavity. It lies ventral to the esophagus and dorsal to the base of the heart. It is a tracheobronchial in type and consists of three groups of rings: cranial (tympanum) group, intermediate (tracheosyringeal) group and caudal (bronchosyringeal) group. In addition, there are interbronchial ligament (brachidesm), lateral and medial vibrating membranes as well as the pessulus at the tracheal bifurcation.

The tympanum part forms the first part of the syrinx. It is formed of four tracheal rings, firmly attached together by dense fibrous tissue, especially along their sides. They are difference in size and shape between the tracheal rings immediately above it and intermediate syringeal cartilages immediately below it (Figures 1-4). 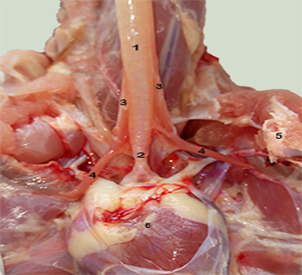 The tracheosyringeal part is located at the point of the tracheal bifurcation just below the tympanum. It is formed of four highly modified incomplete tracheal rings, compressed laterally. They are fused with the pessulus ventrally, and their free ends directed dorsally. The first intermediate syringeal ring is smaller than the other three (Figure 3&4A).

The pessulus is triangular in shape, located at the summit of the bronchial junction. Its pointed apex directs cranially through the lumen of syrinx, while its broad base directs caudally (Figures 2-4). 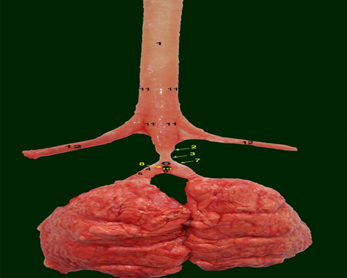 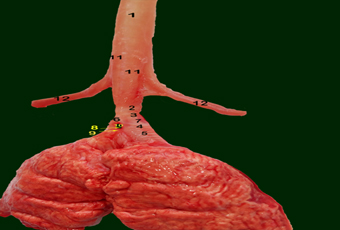 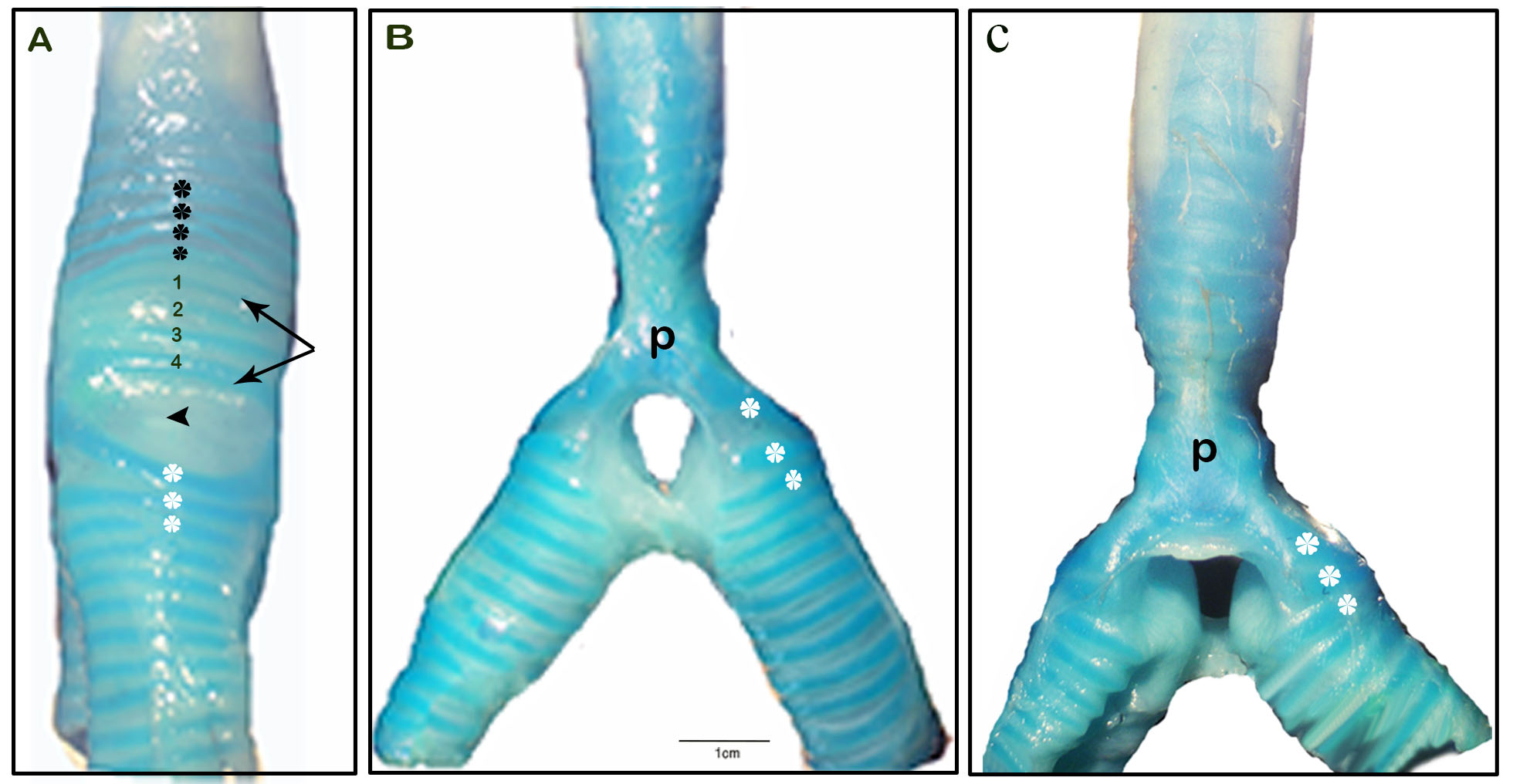 The present results revealed that the tympanum was consisted of four tracheal rings, like the Denizli roosters [12] and sparrow hawks [25]. The finding obtained from this investigation was in agreement with Myers and Meclelland [26,27] and dissimilar from the result of Freeman Dyce et al., and King [28-30] which recorded that the tympanum was consisted of three or five tracheal rings in chickens. While the number of tracheal rings forming the tympanum were reported as two in quails [20,21], three in long legged buzzards [23] ostriches [19] guinea fowls [18] turkeys [31] and song birds [32] five in sea gulls [33] and pigeons [14].

The lateral and medial tympaniform membranes located at syrinx undertake the voice production, these results entirely confirmed with authors in several types of birds [2,35,40-42]. The location of lateral tympani form membrane in this investigation was the same with Myers [26] Bell and Freeman [43] as well as Meclelland [27] similar location also reported in ostriches [19] singing birds [32] and turkeys [15,17]. While different locations were reported in some birds such as; it was extended between the third and fourth tracheosyringeal rings as in pigeons [14,27,44] located between first and second bronchosyringeal half-rings as in sea gulls [2,33] and long legged buzzards [23]. The inward curve of that membrane which gave the syrinx its characteristic appearance was also recorded by King and Mclelland and Nickel et al. [3,34]. The location of medial tympaniform membrane in the present work was in agreement with Myers and Meclelland [26,27] similar observation was also recorded in ostriches [19] Japanese quails [21] Denizli roosters [12] mallards [9,22] and song birds [43]. This observation different from the result of Onuk et al. [10], in geese, which recorded that it was connected the pessulus and second bronchosyringeal half-ring.

© 2019 Maksoud A. This is an open-access article distributed under the terms of the Creative Commons Attribution License, which permits unrestricted use, distribution, and reproduction in any medium, provided the original author and source are credited.