Thelazia callipaeda, which is the main causative organism in thelaziasis, commonly infects orbital cavities and associated tissues. Thelazia callipaeda infectin is rarely reported in humans, especially in infants. Here we reported a case about a 3-month-old male infant infected thelazia callipaeda. Mother found something squirmed in the right eye when breastfeeding the baby without secretions and redness. On examination under the slit lamp, we found the creamy thread-like mobile worm in the conjunctival sac in the right eye. During surgical opration, 2 worms were extracted from the right eye. No recurrence during 3-month follow-up. Here presented the life of Thelazia callipaeda, the detailed clinical and morphological information. The case indicates us to identify differential diagnosis of ocular surface diseases, especially in infant patients.

Thelazia callipaeda is known as an oriental eyeworm because of its high incidence in eastern and southeastern Asia[1-3]. However, in recent years, thelaziasis is also frequently reported in eastern and southern Europe4. Thelazia callipaeda is a spiruroid nematode which is the main causative organism in thelaziasis, also an arthropod-borne zoonosis commonly infecting orbital cavities and associated tisssues of carnivores [1, 2]. Thelaziasis which could causes mild to severe signs and lesions, is rare infected in human, especially in infants. The lesions may include lacrimatin, irritatin, conjunctivitis, keratitis, or even corneal ulcers and blindness [4].

Here, a case of Thelazia callipaeda infection in a 3-month-old infant is reported. The aim is to get the attention of ophthalmologists. Maybe, this should be included in the differential diagnosis of ocular surface diseases, especially in infant patients.

In August 2017, a 3-month-old infant from a rural area in Henan Province, located in central China, came to our ophthalmology clinic outpatient. His mother told us that she found something squirming in the right eye of her son for 20 days when breastfeeding in the light. 10 days before presentation, the mother visited the reginal hospital (Luyi County Hospital), the infant was too noisy to further examine. Redness represented in the right eye of the infant 2 days before.

Therefore, the mother came us to seek help for his son. On examination, the right eye showed mild hyperemia with follicular hypertrophy and revealed the presence of creamy thread-like mobile worms in the conjunctival sac. The laboratory data, leucocyte count, eosinophil count and C-reactive protein were within normal limits. Under general anesthesia, oxybuprocaine hydrochloride eyedrops were also used. After opening the right eye with the blepharostat, two worms were appeared in lower eyelid conjunctiva sac (Fig 1). Extracted the two worms from the right eye with microscope forceps(Fig 2), however, no worms were detected in the left eye. We rinsed the right eye with sterile physiological saline, then tobradex ointment was used at the end of the surgery. Tobramycin eye drops were used for 2 weeks after the operation. The mild hyperemia with follicular hypertrophy disappeared rapidly after the removal of the worms within two weeks. Within 3-month follow-up, there was no recurrence of new worms. 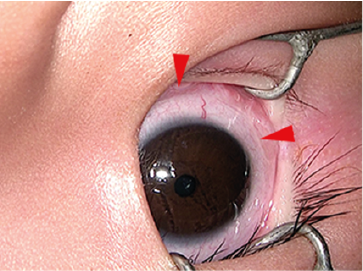 Figure 1: Examination shows the presence of one creamy thread-like worm (red arrow) in the conjunctival sac of the infant with mild follicular conjunctivitis. 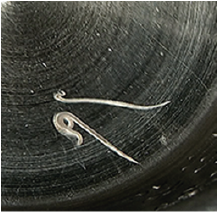 Figure 2: The appearance of thelazia callipaeda taken out of the conjunctial sac of the infant.

The main definitive hosts of Thelazia callipaeda are dogs and cats, rarely humans. Drosophilid flies are the vector host. When flies feed on lacrimal secretions from the effective host, the first-stage larvae released by adult female nematodes in the conjunctival sac is also ingested. The first-stage larvae develop to the infective larvae within the flies’ body and moult twice. The third stage larvae migrates through the body cavity of the vector and emerge from the labella of the infected flies. When the infested fly feeds on ocular secretions of a new host, the infective larvae are then deposited onto the conjunctiva and then they develop into the adult stage feeding on lachrymal secretions [2, 5]. The ecology and biology of the vector of drosophilid flies, thelaziasis occurs predominantly in isolated rural communities with poor living and socioeconomic standards. Thus, the infant lived in a rural area with poor sanitation and many dogs and cats were raised in his residential places. A previous epidemiological study by Wang et al. [6] reported a high thelazia callipaeda infestation rate of 33.3% in domestic dogs in a neighboring county. All in all, these poor conditions are all the underlying risk factors for this zoonotic infection in the infant.

Thelazia callipaeda infection rarely occurs in humans, and onset at less than 1-year-old infant is quite rare. Reports by Hong et al. [7] and Handique et al 8both described thelaziasis in 7-month-old infants from Korea and India, respectively. So far as we know, the youngest thelaziasis infected patient reported is a male infant aged 3 months old from an article published in Chinese [9]. However, the three case reports mentioned above have the same defection, that is, the absence of the clinical images showing the worms present in the conjunctival sac. Unique to our case, detailed and morphological information pertaining to Thelazia callipaeda infection was clearly demonstrated in this infant patient.

Infants are always not able to finish the detailed inspection, in addition, worms squirm in the conjunctiva sac. Therefore, it is difficult to diagnose this disease if only small numbers of nematodes are present. Moreover, the presence of callipaeda in the eyes often causes infants to scratch their eyes, facilitating bacterial secondary infection if parents could not notice this in the first time. We reported this report to strengthen the awareness in ophthalmologists of the risk for this rare infant disease and the need to include this infection in the differential diagnosis of ocular surface diseases, such as allergic or pathogen-causing conjunctivitis. Always keep in mind that a thorough and careful examination is the most important way required for a correct diagnosis, especially in infant patients.

Prevention of infant thelaziasis includes control of the fly vector by use of bed nets to protect infants while they are sleeping and by keeping their faces and eyes clean, treating infected domestic animals with effective drugs, creating public awareness about this disease and improving environmental sanitation. Although pharmacological treatment for canine infection with thelazia callipaeda seems to be effective, mechanical removal of parasites in humans remains the only curative option [2-4].

The authors declare that they have no conflict of interest.

©2021 Zhang F. This is an open-access article distributed under the terms of the Creative Commons Attribution License, which permits unrestricted use, distribution, and reproduction in any medium, provided the original author and source are credited.

Figure 1: Examination shows the presence of one creamy thread-like worm (red arrow) in the conjunctival sac of the infant with mild follicular conjunctivitis.

Figure 2: The appearance of thelazia callipaeda taken out of the conjunctial sac of the infant.