We describe a case of a patient presenting to the emergency department with non-specific gastrointestinal symptoms, diagnosed on computed tomography as a large bowel obstruction secondary to a stenosing sigmoid malignancy and a complex cystic ovarian mass, also concerning for malignancy, in the presence of an elevated Cancer Antigen 125 (CA-125). The patient proceeded to theatre for a colonoscopy, laparotomy, salpingo-oopherectomy, and appendicectomy, and was found to have a tubo-ovarian abscess.

This 34-year-old female without any past medical or surgical history, was referred by her GP. She had recently been seen in another hospital after two months of persistent non-specific gastroenterological symptoms and discharged home after unremarkable pathology results to her GP for further outpatient investigations. She was referred to our Emergency department due to ongoing concern. She described having symptoms fluctuant and intermittent symptoms, consisting of nausea, fevers, anorexia and diarrhoea as well as increasing abdominal bloating, pain and a six (6) kilogram weight loss over several weeks.

Examination demonstrated abdominal distension without shifting dullness. The abdomen was otherwise soft and non-tender, and no palpable masses were felt. There were no other specific examination findings.

Abdominal ultrasound demonstrated a 5.9cm left adnexal mass and free fluid in the pelvis and abdomen and the resultant gynaecology consult suggested outpatient follow-up in clinic with abdominal computed tomography (CT) for a decision regarding further management.

The patient was admitted to the Emergency Short Stay Unit for observation given the atypical features on history and underwent a CT abdomen and pelvic (CTAP) because of ongoing symptoms. Her CTAP demonstrated a large bowel obstruction secondary to a suspected stenosing sigmoid malignancy. This was favoured to represent primary rather than secondary malignancy, with dilated small bowel with mural thickening and mild periportal oedema suspicious of early ischaemic change. A 47 x 45 x 57mm complex cystic left ovarian lesion was again noted, concerning for malignancy, including primary malignancy in the setting of elevated CA-125, or Krukenberg tumour in the setting of a sigmoid primary. There was a small volume of free fluid in Morrison’s pouch and bilateral pericolic gutters. Two incidental pulmonary nodules in the right middle lobe and left lingula segment were also identified. 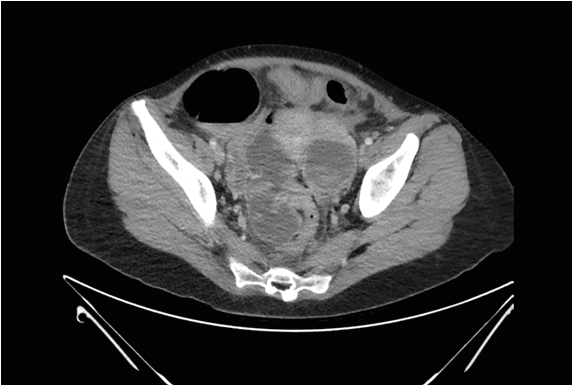 Despite the well appearance of the patient, concerning features such as unexplained weight loss and ascites in a young patient should alert the clinician to a possible underlying sinister diagnosis. In addition, it has been suggested that a unilateral ovarian mass in the presence of an elevated [1]. CA-25 should have the diagnosis of a colorectal cancer excluded before treatment [2].

The patient proceeded to theatre for a colonoscopy, laparotomy, salpingo-oopherectomy, and appendicectomy. Colonoscopy revealed a normal mucosa, with extrinsic compression causing obstruction at 20cm from the anus over 5cm in length. Laparotomy demonstrated bilateral pyosalpinx with a left tubo-ovarian abscess. 100mls of frank pus was drained containing a polymicrobial growth of Escherichia coli, Streptococcus anginosus, and Prevotella denticola. Inflammation and fibrosis associated with a tubo-ovarian abscess tends to spread posteriorly into the perirectal and presacral fat, resulting in involvement of the rectosigmoid region [5].

A Krukenberg tumour, which is a metastatic tumour to the ovary, indicates extensive malignant spread within the abdominal cavity; the prognosis is so poor that most patients will die within one year of diagnosis [1]. In one case series, all twenty-five died (ie 0% disease free survival), with median time from diagnosis to death being 19 months [2]. Only 3.6% of colon and rectum tumours in females have ovarian involvement [3]. Of those with a gastrointestinal origin, 33.3% originate from the sigmoid [1]. Only 40.2% of Krukenberg tumours are synchronously diagnosed [4] in the majority, only one is diagnosed before the other.

However, in a similar scenario tubo-ovarian abscess needs to be considered as an important differential diagnosis.

In one case series, 28 of 32 patients who had a tubo-ovarian abscess demonstrated sigmoid colon constriction demonstrated on barium enema [6]. This case illustrates multiple decision points that the emergency team may need to face, the uncertainty that can exist with CT imaging, and the unexpected results that may eventuate in clinical practice.

©2020 Lim A. This is an open-access article distributed under the terms of the Creative Commons Attribution License, which permits unrestricted use, distribution, and reproduction in any medium, provided the original author and source are credited.