Complete Regression of Cystic Hygroma: Spontaneous or Due to Complex Homeopathic Treatment?

Lymphangiomas, or cystic hygromas, are a heterogeneous group of benign congenital cystic malformations of the lymphatic vessels. Around 50% develop in the head and neck region [1,2]. Surgical removal is the commonest treatment; alternatives are needle aspiration, injection of sclerosing agents, and observation [1-3]. Needle aspiration is considered a non-definitive decompressive measure [1-4]. Sclerosing agents used include steroids, alcohol, bleomycin sulphate, tetracyclines, and more recently OK-432, prepared from a low-virulence strain of Streptococcus pyogenes. OK-432 seems particularly promising and is often used in patients at high risk of post-surgical recurrence [5].

Spontaneous regression (partial or complete) of cystic hygromas is not uncommon and modern management policy tends to be conservative, being limited to periodic Ultrasonic (US) check-ups, with surgery reserved for progressive lesions [1,3].

We present the case of a young girl with congenital cystic hygroma of the neck, initially 4 cm in maximum diameter. After a series of severe episodes of beta-haemolytic streptococcal tonsillitis, all treated with clarithromycin, the child was hospitalized with superinfection of the hygroma. Intramuscular ceftriaxone resolved the symptoms in 10 days, but the hygroma was then 8 cm in diameter. Four months later, after US revealed the lesion had stabilized at 4 cm, we commenced a four-month course of homeopathic treatment consisting of Lymphomyosot and Echinacea Compositum. During this treatment the hygroma reduced in size progressively and three months after its initiation had disappeared clinically and was barely perceptible on US. Nine months later US showed complete resolution of the hygroma.

The girl, now 23 years old, second child of a 34-year-old mother, was born normally in May 1996, weight 3.8 kg, Apgar index 10/10. She was breast fed exclusively to 10 months and continued to receive her mother’s milk up to 24 months. At six months the mother noticed a protrusion at the base of the neck on the left side, bringing it to the attention of a pediatrician when the child was 18 months. A soft tumefaction of doughy consistency with indistinct boundaries was found, which after US examination was diagnosed as cystic hygroma 4 cm in diameter (Figure 1). Periodic check-ups were prescribed. A detailed chronology of all subsequent treatments and events is given in Table 1. 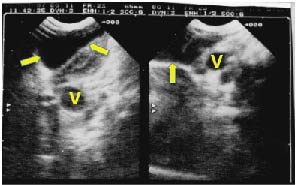 Figure 1. First ultrasonogram taken in November 1997 resulting in diagnosis of cystic the hygroma. The large cystic lesion is evident at the base of the neck on the left, with anechogenic center, and moderately thickened walls. Maximum diameter 4 cm. Arrows: hygroma, V: Blood vessels.

Table 1. Detailed chronology of events and treatments up to complete resolution of congenital cystic hygroma in child born May 1996.

Briefly, she had varicella at 30 months followed by several severe bouts of tonsillitis, usually with pharyngeal swab positive for group A beta-haemolytic streptococcus, treated successfully with clarithromycin. Figure 2 shows a control US at age 46 months with cystic hygroma diameter 4 cm and presence of three adjacent lymph nodes. The patient was hospitalized in October 2000 (age 53 months) for severe superinfection of the cystic hygroma, which had increased to 10 cm. Ceftriaxone resolved the symptoms in 10 days, but the hygroma was 8-10 cm in diameter (Figure 3). During this time, she was transferred to pediatric surgery for further evaluation. Surgery was programmed for March 2001. On discharge she was well but the hygroma was 8 cm. Clinical and US check-ups were prescribed. The hygroma had reduced to 4 cm by December 2000 and had stabilized at 4 cm in January 2001. After informed consent (parents) homeopathic treatment was initiated in February consisting of Lymphomyosot phial (1.1 ml) and Echinacea Compositum S. phial (2.2 ml). The two phials were combined for daily oral administration in three parts, 15 minutes before meals. This treatment continued for four weeks, followed by the same treatment on alternate days for a further two months, and then with two phials twice a week for another month. The treatment concluded at the end of May 2001 after 64 phials of each preparation had been given. Detailed information on these preparations is given in Tables 2 and 3. 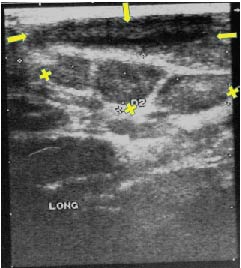 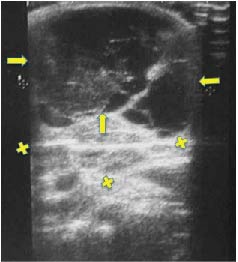 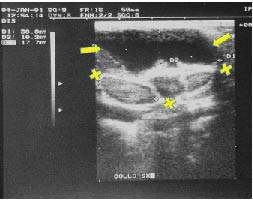 Following the initiation of this treatment the hygroma reduced progressively in size. At the end of March, it was barely evident and in April was no longer clinically perceptible. US in May revealed that the liquid component of the lesion had resolved completely to be replaced by a modest subcutaneous thickening; three moderately enlarged lymph nodes persisted (Figure 5). Ultrasound 10 months later (November 2001) revealed complete resolution of the hygroma (Figure 6): the area of the former lesion had completely normalized and the subcutaneous thickening was no longer present, two lymph nodes were still present. No undesirable effects attributable to the homeopathic medications were reported or observed. 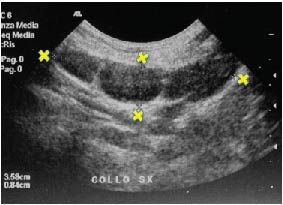 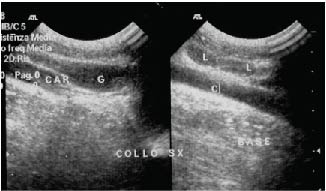 Figure 6. Ultrasonogram November 2001. The area where the lesion had been is has completely normalized. Even the subcutaneous thickening evident in Fig. 5 has disappeared. Two lymph nodes (L) are visible. G: Jugular vein; C/CAR: Carotid artery.

In February 2001 while receiving the homeopathic treatment, the child developed mild tonsillitis (sore throat, listlessness, tonsillar reddening but no plaques) with slight temperature (37.2°C) lasting one day; a swab was positive for beta-haemolytic streptococcus. Clarithromycin was given for seven days starting from the positive swab result obtained after the symptoms had resolved.

Between March and May 2001 there were two further bouts of tonsillitis; both lasted one day during which the child was listless with sore throat, temperature (37.2°C), and reddened tonsils without plaques. In both cases a swab was positive, prompting seven-day courses of antibiotics, in each case initiated after the symptoms had resolved.

In June 2001, after the homeopathic treatment had concluded, the child had bronchitis which resolved without antibiotics. In October 2001 there was another episode of beta-haemolytic streptococcus tonsillitis, with reddened plaque-covered tonsils and high temperature (39.5°C). In December she contracted an intestinal virus infection with nausea, diarrhoea and temperature (37.2°C) which resolved spontaneously in a week.

The patient-led explosion in the popularity of homeopathic treatments [6], has pushed scientists and physicians into studying them seriously [7-9]. It has been proposed that homeopathic preparations act by two mechanisms: biochemical at low and medium dilutions (up to D9) [10], and by some electromagnetic effect at high dilutions [10-12].

Published studies on the homeopathic use of arnica (a component of the treatment given to our patient) clearly show it has an anti-inflammatory effect [13] and can help prevent post-surgical complications [14].A homeopathic preparation containing arnica was also significantly more effective than placebo in reducing the severity and incidence of chemotherapy-induced stomatitis [15]. Finally, a recent critical review of post 1994 clinical studies that used homeopathic preparations to treat acute upper respiratory tract infections and their complications [16], concluded there was at least equivalence between homeopathic and conventional treatment for uncomplicated upper respiratory tract infections, with fewer adverse events.

Linde et al. [9], identified 186 clinical studies employing homeopathic medicines and performed a meta-analysis on 89; they concluded that the results of these studies were not compatible with the hypothesis that the clinical effects of homoeopathy were completely due to placebo; however, they found insufficient evidence that homoeopathy was clearly efficacious for any single clinical condition and urged that further rigorous and systematic research be conducted.

In our patient (Table 1) pharyngeal swabs for beta-haemolytic streptococcus were negative after the clarithromycin given in September 2000 for tonsillitis Fifteen days later severe hygromal inflammation developed (Figure 3), with pharyngeal swabs still negative for streptococcus. This infection responded promptly to ceftriaxone, suggesting a Gram-positive organism, probably staphylococcus which commonly causes superinfections of this type.

We wish to emphasize:

We chose the complex homeopathic preparations in the present case based on our experience with their use in 11 consecutive children age 4-6 years (treated 1997-2002) with recurrent severe bouts of tonsillitis not responsive to antibiotics. All these children were treated successfully while on the waiting list for tonsillectomy or adenoidectomy. None eventually underwent tonsillectomy as subsequent episodes of tonsillitis, again treated homeopathically, were mild.

A further basis for the use of these preparations are indications as stated by the pharmaceutical company [17]. Echinacea Compositum is indicated to stimulate the defence system in cases of fever, infection, tonsillitis, etc. Lymphomyosot is indicated for lymphatic conditions and gland enlargement including tonsillar hypertrophy, and chronic tonsillar angina.

Our intent in initiating homeopathic treatment in the child was to reduce the chance of recurrence of the superinfection, while awaiting surgery. The clinical response was better than we expected and surgery was no longer required. At latest check-up in May 2006 the hygroma had not recurred.

The mechanisms of action of homeopathic products are not well understood. The mode of regression of the lesion in our patient induces us to propose involvement of the immune system, which may have been stimulated by the preparations given, helping to clear up the infection and triggering regression of a condition that has a known tendency to regress.

We wish also to emphasize the ease of administration, lack of side effects and contained cost of the homeopathic medications we prescribed, suggesting they should be tried in other cases of cystic hygroma, and also in a systematic study on their effectiveness as an adjunct to conventional treatments for bacterial tonsillitis.

From 2006 to September 2019, the patient had been followed by our medical staff. During that time hygroma recurrence was not observed. And severe episodes of tonsillitis due to beta-haemolytic streptococcus have been absent.

To conclude, thanks to the encouraging findings of this case report, in subsequent years we have administered the same treatment to about twenty patients with lymphangioma, obtaining reductions in the use of sclerosing applications and surgery and in some cases complete remissions.

The authors declare no competing interests.

The patient provided informed consent to homeopathic treatment and use of data prior to treatment. The present work carried out under the auspices of the MeTeCo Group (Medicine e TerapieComplementari in Oncologia), operating since 1998 at the National Cancer Institute, Milan, Italy.

©2019 Laffranchi A. This is an open-access article distributed under the terms of the Creative Commons Attribution License, which permits unrestricted use, distribution, and reproduction in any medium, provided the original author and source are credited.

Figure 1. First ultrasonogram taken in November 1997 resulting in diagnosis of cystic the hygroma. The large cystic lesion is evident at the base of the neck on the left, with anechogenic center, and moderately thickened walls. Maximum diameter 4 cm. Arrows: hygroma, V: Blood vessels.

Figure 6. Ultrasonogram November 2001. The area where the lesion had been is has completely normalized. Even the subcutaneous thickening evident in Fig. 5 has disappeared. Two lymph nodes (L) are visible. G: Jugular vein; C/CAR: Carotid artery.

Table 1. Detailed chronology of events and treatments up to complete resolution of congenital cystic hygroma in child born May 1996.