The problem of proper quantum theory of the gravitational field, and thus understanding what is quantum spacetime, is still open and is discussed here.

So, we introduce here the term of CES to replace the erroneous term of “black hole”, since there can’t be a hole per se in the fabric of matter that exists in gaseous, liquid and solid states in spacetime continuum.

Accordingly, we attempt here to merge the loop quantum gravity (LQG) with quantum mechanics and general relativity, for per Einstein, gravity is not a force – it is a property of spacetime itself.

Hence, our CES loop quantum spring model (ill. 1) fits said property of spacetime and is based on our previously published unified theory and model  where we apply the string theory to loop quantum gravity by showing that a CES (formerly termed a “black hole”) is created by gravitational coupling of two linear superstrings in specified boundaries of open strings which are segments with endpoints, and closed strings which form closed loops. (Ill. 1) 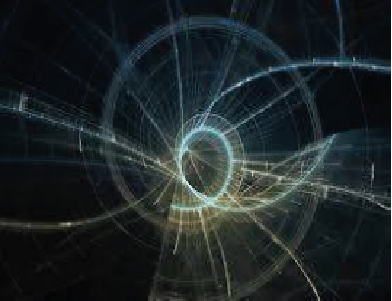 Common research of black holes is based on simple notion of singularity and star's gravitational collapse to form black hole. Our comprehensive research shows that that cosmic energy system is not a hole per se, since it acts as matter accumulator, energy saver and gravitational accelerator of particles which is formed in duality of superstrings in loop quantum gravity of unified quantum field.

It is assumed that “black hole” is formed when star core collapses under hugely amplified magnetic field. But per duality and energy conservation principles, the deformed matter contains the remnants of accumulated energy to be transformed and transferred from one form to another per energy conservation law and Hamilton principle which is valid for particles or deformable bodies, where Einstein–Hilbert action is applicable.

We had previously shown in our paper of unified matter theory that spacematter under said conditions would consist of two parallel superstrings in supertension under gravity that are coupled in a loop quantum field system.

Accordingly, the dynamics of said physical system (CES) under strongly amplified magnetic field is configured in our model to two coupled superstrings of matter, forming an elliptical energy structure, integrating loop quantum spring at the left section of that structure. (Figure 1, Figure 2)

On macro scale, the CES, formerly considered as black hole, is a cosmic superstructure, consisting of a central ellipsoid (pictured in ultramarine) with a jet of plasma from its center, encapsulated by corona ellipse (red) within a sphere (violet) of elliptical boundaries and orbits of matter as in ill. 2 and 3 below.

Figure 3.1 - mid-plane section of a supersonic jet breaking through an inhomogeneous disk of dense gas in the core region of a radio galaxy (Sutherland & Bicknell). This 512^3 simulation was done on the APAC AC supercomputer. 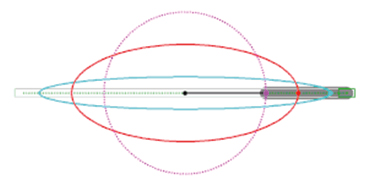 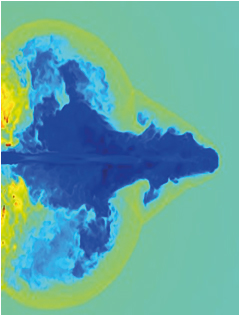 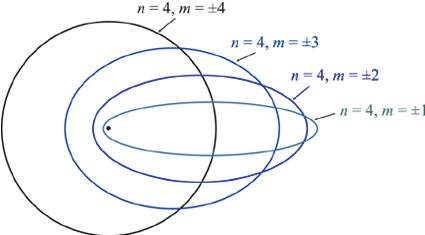 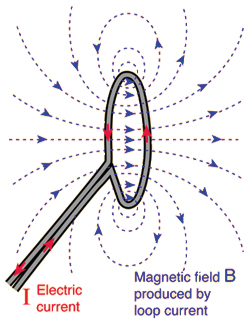 This shows the connection between the complex 3 dimensional matter spin texture due to shape deformation and the spin transport properties as in our CES model with its geometry and entanglement entropy of surfaces in loop quantum gravity within embedded spatial surfaces.

Hence, our CES model represents the transition of a trapped region in a closed superstrings ellipsoid (fig.1, above) to superstrings’ anti–trapped region released by rotating loop quantum spring (fig. 2 above) that triggered a jet of matter in quantum geometry transition akin to gravitational tunneling.

The discussed above elliptical CES acts as cosmic energy accumulating, saving and accelerating system to secure the equilibrium of the galaxies that integrate such CESs.

by activating its loop quantum  spring at the left to open the CES to eject a jet of matter generated by the motion of conductive plasma inside magnetic field.  This is due to the excess energy of electromagnetic quanta, as singular jet of plasma in our CES model, without plasma recoil as shown erroneously in artists’ black hole rendition.

In this paper, we will give a short review on textit{quantum spring}, which is a Casimir effect from the helix boundary condition that proposed in our earlier works. The Casimir force parallel to the axis of the helix behaves very much like the force on a spring that obeys the Hooke's law when the ratio r  of the pitch to the circumference of the helix is small, but in this case, the force comes from a quantum effect, so we would like to call it \textit{quantum spring}. On the other hand, the force perpendicular to the axis decreases monotonically with the increasing of the ratio r . Both forces are attractive and their behaviors are the same in two and three dimensions.

Compact derivation of mathematical equations similar to those of quantum and classical mechanics is given on the base of fractal decomposition of a three-dimensional space. In physical units the equations become Shrödinger and Hamilton-Jacobi equations, the wave function of a free particle associated with a virtual ring. Locally uniform motion of the ring in the physical space provides an original helix (or regular cylindrical spring) model of a relativistic theory equivalent in results with special relativity, the free particle's relativistic Lagrangian emerging automatically. Irregular spring model generates theory similar to general relativity. (Figure 3) 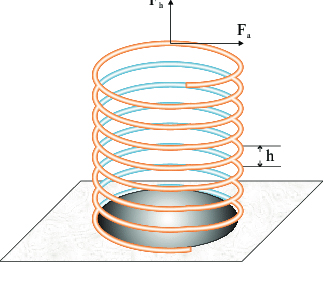 We argue that String Theory and Loop Quantum Gravity can be thought of as describing different regimes of a single unifed theory of quantum gravity. LQG can be thought of as providing the pre-geometric exoskeleton out of which macroscopic geometry emerges and String Theory then becomes the effective theory which describes the dynamics of that exoskeleton. The core of the argument rests on the claim that the Nambu-Goto action of String Theory can be viewed as the expectation value of the LQG area operator evaluated on the string worldsheet. A concrete result is that the string tension of String Theory and the Barbero-Immirzi parameter of LQG turn out to be proportional to each other.

In this manuscript we present a calculation from covariant Loop Quantum Gravity, of a physical observable in a non-perturbative quantum gravitational physical process. The process regards the transition of a trapped region to an anti–trapped region, treated as a quantum geometry transition akin to gravitational tunneling. The physical observable is the characteristic timescale in which the process takes place. Focus is given to the physically relevant four–dimensional Lorentzian case.

We start with a top–to–bottom formal derivation of the ansatz defining the amplitudes for covariant Loop Quantum Gravity, starting from the Hilbert-Einstein action. We then take the bottom–to–top path, starting from the Engle-Perreira-Rovelli-Livine ansatz, to the sum–over–geometries path integral emerging in the semi-classical limit, and discuss its close relation to the naive path integral over the Regge action. We proceed to the construction of wave–packets describing quantum spacelike three-geometries that include a notion of embedding, starting from a continuous hypersurface embedded in a Lorentzian spacetime.

We derive a simple estimation for physical transition amplitudes describing geometry transition and show that a probabilistic description for such phenomena emerges, with the probability of the phenomena to take place being in general non-vanishing. The Haggard-Rovelli (HR) spacetime, modelling the spacetime surrounding the ge- ometry transition region for a black to white hole process, is presented and discussed.

We give the HR-metric in a form that emphasizes the role of the bounce time as a spacetime parameter and we give an alternative path for its construction. We de- fine the classical and quantum observables relevant to the process, propose an interpretation for the transition amplitudes and formulate the problem such that a path integral over quantum geometries procedure can be naturally applied.

We proceed to derive an explicit, analytically well-defined and finite expression for transition amplitude describing this process. We then use the semi–classical approximation to estimate the amplitudes describing the process for an arbitrary choice of boundary conditions. We conclude that the process is predicted to be allowed by LQG, with a crossing time that is linear in the mass. The probability for the process to take place is suppressed but non-zero. We close by discussing the physical interpretation of our results and further directions.

Many theories of quantum gravity, as string theory, loop quantum gravity, and doubly special relativity, predict the existence of a minimal length scale and outline the need to generalize the uncertainty principle. This generalized uncertainty principle relies on modified commutation relations that – if applied to the second quantization – imply an excess energy of the electromagnetic quanta as singular jet of plasma.

Geometry and Entanglement Entropy of Surfaces in Loop Quantum Gravity

In loop quantum gravity, the area element of embedded spatial surfaces is given by a well-defined operator. We further characterize the quantized geometry of such surfaces by proposing definitions for operators quantizing scalar curvature and mean curvature. By investigating their properties, we shed light on the nature of the geometry of surfaces in loop quantum gravity. We also investigate the entanglement entropy across surfaces in the case where spin network edges are running within the surface. We observe that, on a certain class of states, the entropy gradient across a surface is proportional to the mean curvature. In particular, the entanglement entropy is constant for small deformations of a minimal surface in this case. (Figure 4)

On representations of the elliptic quantum group Eτ,η(sl2)

Let g be a complex semisimple Lie algebra, tau a point in the upper half-plane, and h a complex deformation parameter such that the image of h in the elliptic curve E_tau is of infinite order. In this paper, we give an intrinsic definition of the category of finite-dimensional representations of the elliptic quantum group E_{h,tau}(g) associated to g. The definition is given in terms of Drinfeld half-currents and extends that given by Enriquez-Felder for g=sl_2. When g=sl_n, it reproduces Felder's RLL definition via the Gauss decomposition obtained by Enriquez-Felder for n=2 and by the first author for n greater than 2.

We classify the irreducible representations of E_{h,tau} in terms of elliptic Drinfeld polynomials, in close analogy to the case of the Yangian Y_h(g) and quantum loop algebra U_q(Lg) of g. A crucial ingredient in the classification, which circumvents the fact that E_{h,tau} does not appear to admit Verma modules, is a functor from finite-dimensional representations of U_q(Lg) to those of E_{h,tau} which is an elliptic analogue of the monodromy functor constructed in our previous work arXiv:1310.7318. Our classification is new even for g=sl_2, and holds more generally when g is a symmetrisable Kac-Moody algebra, provided finite-dimensionality is replaced by an integrability and category O condition.

Kaluza-Klein approach seems to be able to go somewhere. Supergravity theory fixes the space-time dimensionality to be eleven and at the same time provides the matter fields necessary for compactification to four dimensions. There we also work in an Einstein-Cartan space-time because of the spinor fields, but the geometrization proposal is very different from the one presented here, besides taking quantum effects into account So geometrization of the fundamental interactions may still survive. Ref. 1

The Einstein-Cartan geometry is the most general geometry that preserves l ength under para1 lel transportl '6. There are two bas ic quantities: the space-time metric and the connection From the connection we can build two tensors, the Riemann curvature tensor and the torsion tensor (ref. 2, 3):

©2019 Budnik S. This is an open-access article distributed under the terms of the Creative Commons Attribution License, which permits unrestricted use, distribution, and reproduction in any medium, provided the original author and source are credited.